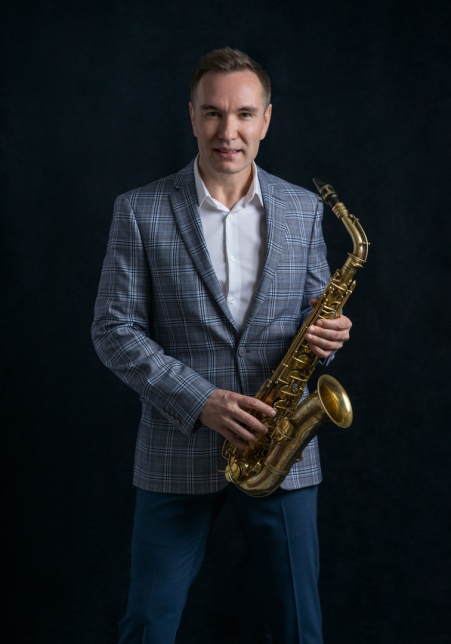 Eddie's story began in Tatarastan, Russia where he grew up in a family of musicians. His mother was a singer and his father was a composer. Eddie traveled with his parents' band making numerous appearances on local television from the age of six when he started to sing.
Growing up, Eddie studied piano for seven years at the music school, where at a young age his compositional skills were already apparent. At the age of twelve he wrote a song using one of his grandmother's poems. The song was published in a local magazine and became a small hit among children. Next, his focus turned to learning how to play the saxophone; studying it for three years before moving to St. Petersburg to learn Jazz saxophone at the Mussorgsky College of Music, at the age of seventeen. Eddie was admitted there based on his performance of two Charlie Parker solos he transcribed note for note from an LP.
After completing his studies, Eddie was discovered and invited to Houston, Texas on a music contract. One year later he received a full scholarship to hone in on his talents at the Clark Terry International Institute of Jazz Studies at Westmar University, located in Le Mars, Iowa. During that time Eddie received several "Outstanding Musician" awards at Jazz festivals in Chicago, Kansas, and St. Louis. After graduating Cum Laude, Eddie returned to Houston where he received his residency papers based on the merit of his abilities; they stated "Extraordinary ability - talent that the US needs". Later he became a citizen.

Presently, Eddie resides in Houston, Texas where he plays in a variety of settings with top musicians. For 17 years, Eddie was part of Brennan's of Houston restaurant's band where he played traditional and New Orleans Jazz.

Nowdays, every Sunday brunch, Eddie plays alongside DJ at one of the trendiest new restaurants in Houston - Bisou. Every Thursday night Eddie performs with dance music DJs at Belvedere club.

In addition, Eddie Akhmetchine Jazz Trio has been performing as part of "Harmony in the Air" Performing Arts Program created by the Houston Airport System.

Eddie Akhmetchine's compositions are influenced by Jazz Fusion, World, and Pop music. His first album of all original music "Look Within" along with his more recent album "No Regrets" are available on Apple Music - iTunes, Amazon, cdbaby, etc.

Eddie's unpublished work "New Day" was recorded by award winning engineer Andy Bradley at well-known SugarHill Studios. This project had some fabulous musicians from Houston and Austin: Andrew Lienhard-piano, Paul Chester-guitar, Chris Maresh-bass, and Clyde Adams-drums. The CD was edited by very talented Erich Avinger at his "Invisible Audio" music studio and will be available in the near future.